This is why trump's lawyers arguing 4th amendment violations is stupid

He hasn't been charged with anything...yet


https://www.yahoo.com/news/trumps-mar-lago-lawsuit-spotlights-234045292.html
Trump's Mar-a-Lago lawsuit spotlights how difficult search warrants are to challenge – by a criminal suspect or an ex-president – until charges are brought 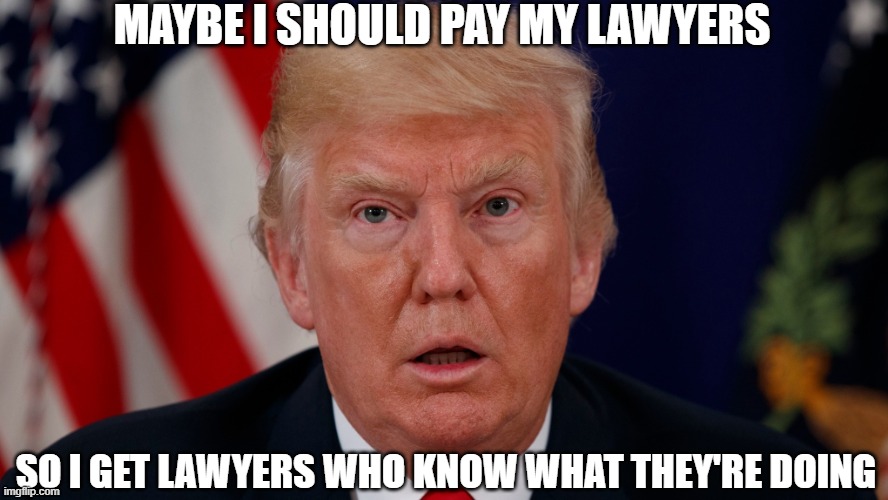 Some observers say that the lawsuit filed by former President Donald Trump on Aug. 22, 2022, challenging the FBI’s recent search of his Mar-a-Lago estate is “filled with bombastic complaints” and will “blow up in his face.”.

I am a legal scholar who is an expert on the various Trump investigations and the constitutional protections against wrongful searches.

I think it is important to recognize that Trump’s lawsuit raises a very serious point: Current federal law does not provide good procedures to protect the rights of people subjected to a search warrant.

The Constitution protects “the right of the people to be secure in their houses and papers” and requires that search warrants must “particularly describe” the place to be searched and the things to be seized.

Trump’s lawsuit asserts that these Constitutional protections were violated both by the broad language of the search warrant and the way it has been carried out by the FBI.

Trump’s lawsuit asks for a judge to halt the FBI’s review of what it seized from Mar-a-Lago and the appointment of an independent judicial officer to conduct the review instead.

Trump also asks for a more detailed receipt of what the FBI took, and for the agency to return all of the items not properly seized.

Granting these requests might both be fair to Trump and also in the public interest, by bolstering public confidence in the handling of the search, which has been criticized by Trump and his supporters as politically motivated, intrusive and overbroad.

However, as shown by a similar lawsuit recently filed by one of Trump’s former lawyers, John Eastman, people who are subjected to a federal search have limited ability to challenge its legality.

Eastman’s cellphone was taken by federal agents as he was leaving a restaurant in June 2022, amid a federal investigation into his alleged attempt to overturn the 2020 election results.

The search warrant authorized seizing “any and all electronic or digital devices and all information in such devices” without identifying what crime was being investigated. Eastman challenged the warrant on the same grounds as Trump’s lawsuit, claiming it authorized an overbroad search of everything stored on his phone.

Eastman tried to get a federal court to halt FBI examination of his phone by invoking a Federal Rule of Criminal Procedure, or Rule 41, which says “a person aggrieved by an unlawful search and seizure” may seek return of the seized property. In response, the government told the court that Eastman can only use Rule 41 to recover property for which he can show an urgent need. Eastman cannot use Rule 41 to challenge the constitutionality of the FBI seizing his phone or to prevent the law enforcement agency from reading attorney-client communications stored on the phone, the government said.

Trump’s lawsuit faces the same problem. Apart from Rule 41, there is currently no clear way under federal law to challenge the validity of a search unless and until criminal charges are filed.

This loophole in federal law – and American law generally – means that court cases about searches are almost always in the context of criminal prosecution.

Because those making court arguments for rights against improper searches are usually accused or convicted criminals, the general public has paid little attention to the fact that search warrant procedures are an exception to a fundamental principle of American law, which is that people have the right to participate in judicial proceedings regarding their rights.

As pointed out by the government in opposing the unsealing of the FBI affidavit used to obtain the Mar-a-Lago warrant, federal courts consistently allow investigative records to be sealed from both the subjects of investigation and the public. A judge’s initial decision to issue a search warrant is almost always based only on a one-sided presentation by the government.

Not only do subjects of a requested warrant have no chance to present their side to the judge, but they do not even know about the warrant process until the government is at the door, warrant in hand. And then, as Trump’s lawsuit complains, this secrecy continues after the search is conducted as the government reviews what it seized.


Trump’s request for a ‘special master’​

The FBI is now using a “taint team” for the Mar-a-Lago search and seizure of classified documents. This is a special group of agents designated to do an initial review of seized materials.

These screening officers then decide what materials can be turned over for further review by FBI agents doing the actual criminal investigation. In Trump’s case, however, the standards for such review are not public and nothing in the court record indicates review standards have been submitted for court approval.

Even if review criteria are clearly defined, the practice of using FBI agents for screening has been criticized by some courts as providing insufficient protection against improper use of items seized during a search.

For example, one federal appellate court described taint teams as putting the fox in charge of guarding the hen house. Even on the taint team, FBI agents may still have a “prosecutorial interest” that could lead them to hand over documents to investigators that should be protected from government view.

This kind of action, whether because of malice, neglect or simply an honest mistake, can take place before the subjects of the search have an opportunity to seek court protections for their documents.

That court did what the Trump lawsuit is now requesting – it ordered that a temporary judicial officer, called a “special master,” take over the initial review, to exclude documents that should not be seen by the government.

There are other instances of commissioning a person to do such a job. In 2018, for example, when federal agents executed search warrants against Trump’s former personal attorney, Michael D. Cohen, a retired federal judge was appointed as a special master to screen everything that was seized before it could be turned over to prosecutors.

The justification for placing an independent judicial officer between the FBI and the trove of documents seized at Mar-a-Lago is underscored by the broad way the search warrant was written.

This means it is possible that some of the 26 boxes listed on the FBI’s property receipt were seized not because they contained evidence of a crime but simply because they were stored in the same location as classified documents. Without something like the protections of a special master procedure, FBI agents could end up reading thousands of pages taken from Trump’s home that have no relevance to the suspected crimes listed in the warrant.

Perhaps now that the one-sided nature of search warrant procedures is being challenged by a former president, this problem will get new attention.

This article is republished from The Conversation, a nonprofit news site dedicated to sharing ideas from academic experts. It was written by: Clark D. Cunningham, Georgia State University.
Reactions: nail1988


phuki@@ idiots
Reactions: nail1988
You must log in or register to reply here.