Let the trumpanzees begin to fling their poo defense...


https://www.nytimes.com/2022/08/23/us/politics/trump-classified-documents-fbi-letter.html
Trump Kept More Than 700 Pages of Classified Documents, Letter From National Archives Says
The letter, which was sent to the former president’s lawyers, described the state of alarm in the Justice Department as officials began to realize the nature of the documents kept at Mar-a-Lago.

President Donald J. Trump took more than 700 pages of classified documents, including some related to the nation’s most covert intelligence operations, to his private club and residence in Florida when he left the White House in January 2021, according to a letter that the National Archives sent to his lawyers this year.

The letter, dated May 10 and written by the acting U.S. archivist, Debra Steidel Wall, to one of Mr. Trump’s lawyers, M. Evan Corcoran, described the state of alarm in the Justice Department as officials there began to realize how serious the documents were.

It also suggested that top department prosecutors and members of the intelligence community were delayed in conducting a damage assessment about the documents’ removal from the White House as Mr. Trump’s lawyers tried to argue that some of them might have been protected by executive privilege.

The letter was disclosed on Monday night by one of Mr. Trump’s allies in the news media, John Solomon, who also serves as one of the former president’s representatives to the archives. The archives then released the letter on Tuesday.

It was made public shortly after Mr. Trump’s lawyers filed a legal motion on Monday asking a federal judge in Florida to appoint an independent arbiter, known as a special master, to weed out any documents protected by executive privilege from a trove that was removed during an F.B.I. search of Mar-a-Lago on Aug. 8.

The motion, filed in Federal District Court in Southern Florida, came as a different federal judge was deciding how much — if any — of the underlying affidavit used to justify the search warrant should be publicly released.

Mr. Solomon, appearing on Tuesday on a podcast run by Stephen K. Bannon, Mr. Trump’s former White House aide, tried to suggest that Ms. Wall’s letter somehow implicated President Biden in the struggle over the classified documents. At one point in the letter, Ms. Wall told Mr. Corcoran that Mr. Biden had agreed with her and others that Mr. Trump’s attempts to assert executive privilege over the materials were baseless.

But the letter never indicated that Mr. Biden was in charge of the decision rejecting Mr. Trump’s claims of privilege or that he had anything to do with the search of Mar-a-Lago, as Mr. Solomon suggested.

In fact, the letter could further implicate Mr. Trump in a potential crime. It confirmed, for instance, that the former president had kept at Mar-a-Lago documents related to Special Access Programs, some of the nation’s most closely held secrets, before the F.B.I. searched the property. The search was part of an inquiry into whether the former president had willfully retained highly sensitive national defense papers and obstructed a federal investigation.

The letter also deepened understanding of the back-and-forth between the archives and Mr. Trump’s lawyers over how to handle retrieving the papers.

It described how archives officials had “ongoing communications” with Mr. Trump’s representatives last year about presidential records that were missing from their files. Those communications, Ms. Wall wrote, resulted in the archives retrieving 15 boxes of materials in January, some of them containing highly classified information marked top secret and others that were related to Special Access Programs.

But even after the archives retrieved the records, the letter said, Mr. Trump’s lawyers, in consultation with the White House Counsel’s Office, asked for time to determine whether — and how many of — the documents were protected by executive privilege, leading to negotiations that delayed the F.B.I., the Justice Department and the intelligence community from assessing the materials.

Those negotiations continued through April, even as Ms. Wall alerted Mr. Trump’s lawyers about the “urgency” of the agencies’ request to see the documents, which touched on “important national security interests,” the letter said. Ms. Wall ultimately rejected Mr. Trump’s claims of executive privilege after consulting with a top Justice Department official — a decision that Mr. Biden deferred to. As Ms. Wall wrote to Mr. Corcoran, before alerting him in May that the archives would soon hand the documents to the F.B.I., “The question in this case is not a close one.”

“The executive branch here is seeking access to records belonging to, and in the custody of, the federal government itself,” Ms. Wall wrote, “not only in order to investigate whether those records were handled in an unlawful manner but also, as the national security division explained, to ‘conduct an assessment of the potential damage resulting from the apparent manner in which these materials were stored and transported.”

Mr. Solomon’s decision to release the letter did more than confirm that Mr. Trump had kept some of the country’s most highly guarded secrets in his relatively unsecured beachfront club in Florida. It also revealed that well before Mr. Trump’s lawyers argued in their court filing on Monday that many of the records were protected by executive privilege, the same argument had been rejected by the White House and a top official at the Justice Department.

The court filing also appeared at times to make arguments that could ultimately harm Mr. Trump.

One long section of the motion, “President Donald J. Trump’s Voluntary Assistance,” was devoted to portraying him as having fully cooperated with the archives and the Justice Department from the outset. But read in a slightly different manner, the facts laid out in the section could be construed as evidence that Mr. Trump had instead obstructed the investigation into the documents.

The section noted how he willingly returned the first batch of 15 boxes to the archives, then — one day after Ms. Wall’s letter was sent to Mr. Corcoran — “accepted service of a grand jury subpoena” seeking to reclaim more documents with “classification markings.”

It also described how even after a top national security prosecutor went to Mar-a-Lago to retrieve the papers sought by the subpoena, the Justice Department felt compelled to issue a second subpoena. That was for surveillance camera footage at the property, suggesting that prosecutors were concerned that Mr. Trump and his lawyers had not been entirely forthcoming.
R

trump is still under the impression that he gets the documents bac... 🤣

https://www.yahoo.com/news/documents-retrieved-mar-lago-were-102958270.html
Some documents retrieved from Mar-a-Lago were so sensitive that FBI agents needed a special clearance to look at them, DOJ says
Tom Porter,Sonam Sheth
Wed, August 31, 2022 at 6:29 AM·4 min read

Some of the documents that FBI agents retrieved after searching Mar-a-Lago were so classified that investigators needed special permission to view them, according to Justice Department court documents filed Tuesday.

The 36-page filing came as a response to former President Donald Trump's lawsuit last week requesting that a court-appointed "special master" be tasked with reviewing the materials the FBI seized after executing a search warrant at his Florida home on August 8.

In addition to detailing the highly classified nature of some records that were recovered, the DOJ also revealed that it suspects there were efforts to obstruct its investigation into the former president's handling of national security information, and the haphazard way that documents were stored at Mar-a-Lago.

"In some instances, even the FBI counterintelligence personnel and DOJ attorneys conducting the review required additional clearances before they were permitted to review certain documents," the filing said.

The department also attached exhibits to its filing, one of which was a photo showing some documents marked "contains sensitive compartmented information up to HCS-P/SI/TK." "HCS" refers to intelligence from clandestine human sources and is highly classified to protect their safety.

The Director of National Intelligence, Avril Haines, recently told lawmakers that her office is leading an investigation into the possible national security risks that would arise if the records had been disclosed or fell into the wrong hands.

Trump, for his part, has railed against the FBI in the weeks since the raid and also claimed that he had broadly declassified all the documents.

However, the Justice Department noted in its filing that Trump never asserted executive privilege or said anything was declassified in conversations preceding the search of his Florida estate. CNN also recently interviewed 18 former Trump administration aides and officials, none of whom said they were aware of any standing declassification order.

More importantly, even if Trump had declassified the materials in his possession, it likely wouldn't matter.

Section E of the Espionage Act, one of the three laws Trump is suspected of having violated, makes it a crime to retain any government records pertaining to the US's national defense, regardless of classification level.

The other two federal statutes Trump's suspected of having broken — 18 USC Section 2071 and 18 USC Section 1519 — criminalize the concealment, removal, and destruction of government records, also regardless of classification level.

Investigators took the extraordinary step of seeking a search warrant against the former president after obtaining evidence that there may have been efforts to hamper its investigation into Trump's handling of government records.

In Tuesday's filing, the Justice Department detailed months of back and forth between US officials and Trump's team in which Trump and his representatives continuously resisted handing over the records that were improperly moved to Mar-a-Lago once he left office.

The government also "developed evidence" that official documents were "likely concealed and removed" from a storage room at Mar-a-Lago "and that efforts were likely taken to obstruct the government's investigation," the filing said.

Trump has sought to portray the search as politically motivated, and has applied to have the special master review the documents because he claims that many were covered by executive privilege and ought to be returned to him.

The Justice Department refuted that claim in its Tuesday filing as well, saying that Trump isn't entitled to a special master because the records in question "don't belong to him" and are the property of the US government.
R 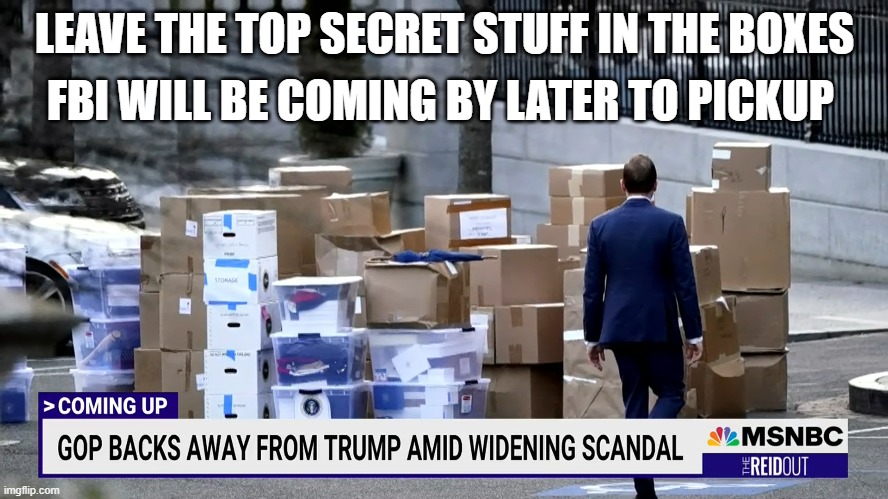