What's a trumpanzee to do? 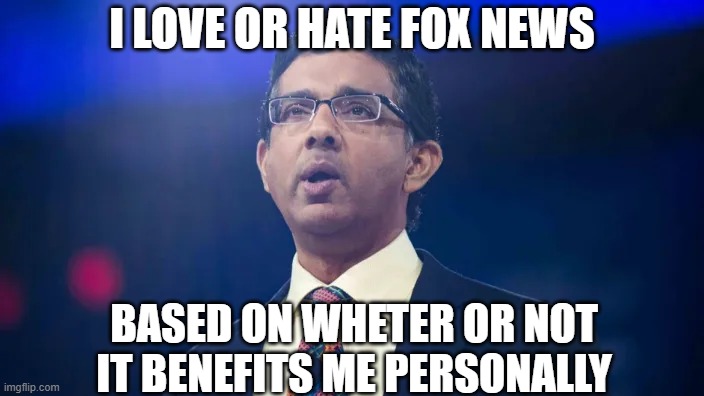 Dinesh D’Souza has been on the outs with Fox News for months. After publicly griping that the conservative cable giant wouldn’t publicize his election-denying propaganda film 2,000 Mules, which had been roundly discredited by fact-checkers and reporters alike, the far-right provocateur has all but disappeared from the Fox News universe.

Yet, even as D’Souza continues to fire shots at Fox News while the conservative media giant refuses to book him, the pardoned felon has used his massive social media platforms to promote and praise the channel.

It appears as though D’Souza wants to use Fox News as both a friend and foe—whichever suits him best at the moment.


​
On his Facebook, Twitter, and Truth Social pages—all of which boast millions of followers—D’Souza in recent weeks has shared several Fox-friendly articles from a little-known website called Conservative Brief. The posts in question feature pieces celebrating the network’s ratings dominance, alongside captions lauding Fox News.

“The Five continues to dominate!” D’Souza wrote in a June 21 post on Truth Social, sharing a Conservative Brief article about the late-afternoon Fox News show’s ratings. He shared similar posts on both Twitter and Facebook.

“Fox News is on a roll!” D’Souza added a day later in another post that was shared repeatedly across all three of his social media accounts. This time, the linked article gushed over the latest ratings win for Fox News star Tucker Carlson’s primetime program. 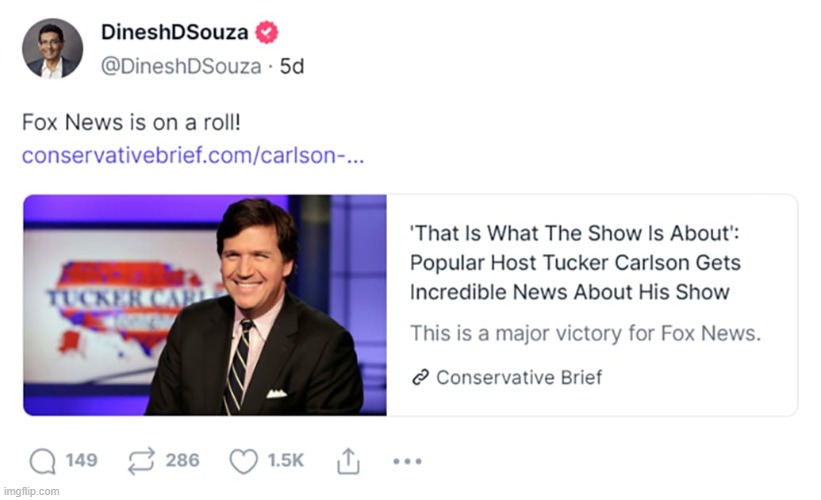 The sycophantic praise for Carlson’s ratings especially stands out given D’Souza’s overt criticism of the Fox News star, which eventually prompted his public beefing with the network. In early May, D’Souza began raging against Fox for supposedly suppressing his film, going as far as personally accusing Carlson and his top producers of “specifically” instructing a guest not to discuss 2,000 Mules on his show.

That guest, True the Vote’s Catherine Engelbrecht, provided the main “research” for D’Souza’s project and was its executive producer. While she didn’t directly mention the film in her May appearance on Carlson’s show, she did assert that her group found thousands of “mules” who “illegally” delivered votes to ballot drop boxes.

Her claims on the program, and additional ones made in the film, have been repeatedly debunked and shot down, with PolitiFact finding D’Souza’s assertion that “mules” delivered 400,000 “illegal” votes to be a “myth.” Even Trump’s former attorney general, Bill Barr, cackled at the mere mention of D’Souza’s film during a Jan. 6 committee deposition, saying he was “unimpressed with it.”

As D’Souza lobbed grenades at the conservative media kingmaker, which included sharing a series of text messages he characterized as “highly abusive,” his regular appearances on Fox News soon dried up.

Once a near-weekly presence on longtime friend Laura Ingraham’s weeknight show, he hasn’t appeared on Fox News or sister channel Fox Business since late April. In fact, his name hasn’t even been mentioned on the air during that time, according to a transcript search.

With D’Souza continuing his anti-Fox campaign—he recently praised pro-Trump gubernatorial candidate Kari Lake for bringing up 2,000 Mules in an unhinged Fox News interview, for instance—why is he sharing over-the-top pro-Fox articles from a no-name clickbait website? The answer seems to lie in the murky waters of the grifty right.

Judd Legum of Popular Information reported back in February that Conservative Brief, an “obscure far-right website with 3 employees,” had somehow emerged this year as “a dominant force on Facebook.” The site, which essentially just aggregates tweets, YouTube clips and other articles, has become more popular on the social media platform than established legacy news outlets like The New York Times or Washington Post.

Legum found that a network of conservative influencers, including D’Souza, shared the website’s pieces on their social media pages—many times with identical text. The Conservative Brief posts shared on these pages would include UTM codes, which is “a way for publishers to know precisely how much traffic comes from a particular source.” The use of such codes would seem to indicate that D’Souza has a direct relationship with the site itself.

He continued: “The fact that all of these Facebook pages use UTM codes when posting Conservative Brief links strongly suggests that Conservative Brief is paying for traffic. That would explicitly violate Facebook rules which state that Facebook Pages ‘cannot accept anything of value to post content that does not feature themselves or that they were not involved in creating.’”

D’Souza did not respond to The Daily Beast’s request for comment. Although he remains persona non grata at Fox News, he does have the support of at least one of the network’s stars. Dan Bongino, a Fox News contributor who hosts a weekend show on the network, recently welcomed D’Souza on his daily podcast to discuss 2,000 Mules at length.

One thing, however, stood out in the two conservative commentators’ lengthy conversation: While Bongino hasn’t been shy in his willingness to criticize his employer, and D’Souza obviously is still outspoken about the network, neither of the chest-thumping pundits ever brought up Fox News.
Last edited: Jul 4, 2022
You must log in or register to reply here.

So it seems Trump's House is hitting the ground running