trump & the GOP caught stealing money from its final senate candidate (maybe because his campaign doesn't matter much to them anymore?) 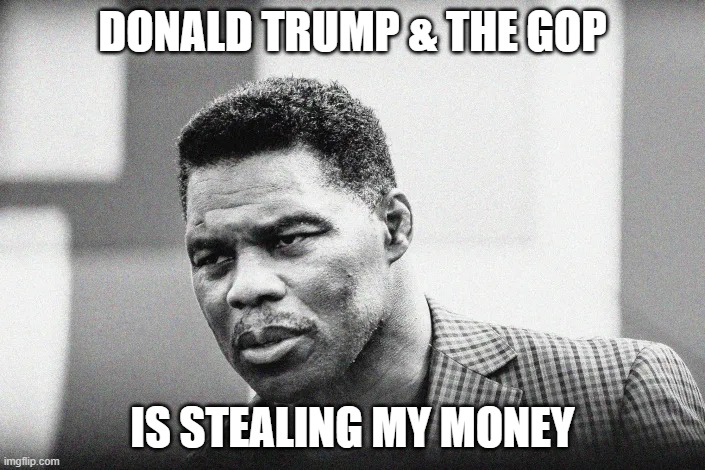 But if donors didn’t see a link that said “click here for details or to edit allocation,” they wouldn’t have noticed that 90% of their contributions automatically went to Trump, with the remaining 10% going to Walker.

After the 90:10 ratio was highlighted on Twitter, Trump’s committee changed the allocation to a 50:50 split.

Paradise credited Trump’s team for making the quick change, saying it “is extremely helpful and it’s what we request others do.”

The problem for the Walker campaign, however, is that the emails from different political committees — one for the North Carolina Republican Party and the campaign committees of newly elected GOP senators J.D. Vance in Ohio and Ted Budd in North Carolina — initially defaulted to 90:10 divisions, as well.

The North Carolina GOP chair, Michael Whatley, said the committee changed its allocation to 50:50 after it was contacted by the Walker campaign Monday.

“Anything that we raise is going to be put into deployments down into Georgia. We’ll definitely be sending teams,” Whatley said.

A spokesman for Vance declined to comment. Subsequent fundraising emails for Walker have defaulted to a 50:50 split, as well. A spokesman for Budd couldn’t be reached for comment.

A spokesperson for Trump said that the former president is committed to helping Walker win and that the earlier 90:10 allocation was to pay for “prospecting” emails, covering the cost of buying a list from a third-party vendor and raising money to expand a list of potential donors. Those new donors' email addresses and their money are then shared along with the cash raised in the joint fundraising endeavor.
You must log in or register to reply here.