Spies were tripping over themselves running around inside Mar-A-Lago from the day he was elected... 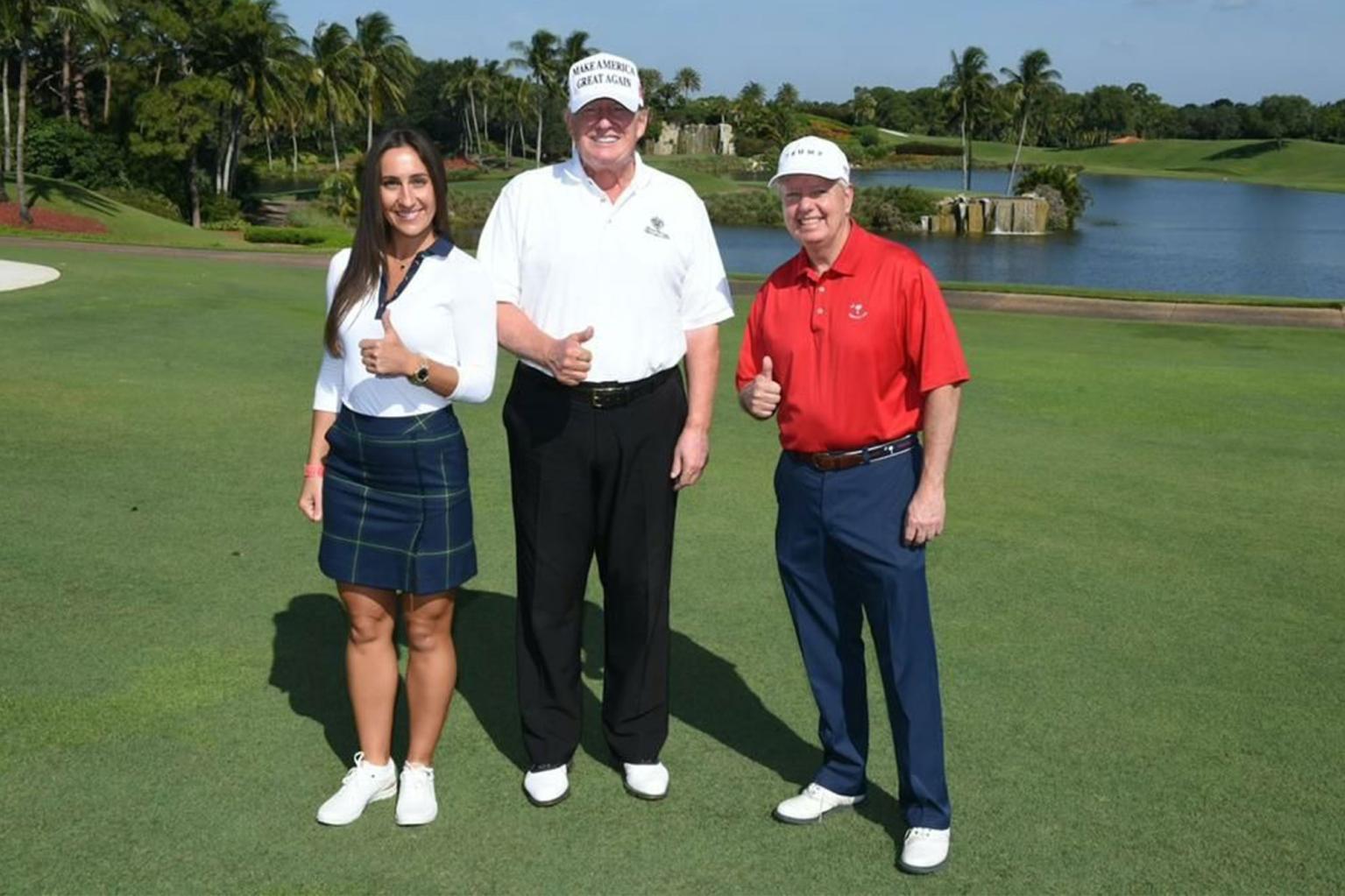 A Ukrainian woman posing as a member of the Rothschild banking family has been outed as a fraud after she allegedly infiltrated former President Donald Trump’s Mar-a-Lago estate, according to reports.

Inna Yashchyshyn, 33, lied to ritzy resort members that she was the heiress to the reputed family’s mass fortune, Anna de Rothschild, according to a probe by the Federal Bureau of Investigation.

She appeared at numerous Mar-a-Lago functions mingling with the likes of Trump, South Carolina Senator Lindsey Graham and others while she held the position as president of United Hearts of Mercy, founded by Florida-based Russian oligarch and former business partner Valery Tarasenko in Canada in 2015, according to the Pittsburgh Post-Gazette.

After hundreds of thousands of dollars in payments to the foundation, processor Stripe Inc., suspected fraud and halted the funds for the campaign which was supposed to help families devastated by the COVI-19 pandemic.

Yashchyshyn, 33, is now the subject of several federal investigations after it was revealed she is not in fact a member of the Rothschild family. She’s additionally under investigation by Canadian authorities for alleged financial crimes.

In actuality, Yashchyshyn is the Russian-speaking daughter of an Illinois truck driver. It’s unclear when she came to the US.

She allegedly made several trips to the ex-president’s Florida estate with her fake identity to make connections with some of the nation’s biggest leaders, according to the paper.

Federal records obtained by the Post-Gazette and the Organized Crime and Corruption Reporting Project showed Yashchyshyn had two fake passports from the US and Canada with the name “Anna de Rothschild.” A Florida driver’s license in her name listed a $13 million Miami Beach Mansion where she never lived.

Yashchyshyn formerly worked in a suburban Miami business connecting pregnant Russian women to Americans looking to adopt a child, the Post-Gazette reported.
However, her web of lies unfolded amid a legal dispute she had with her former associate, Tarasenko

According to Tarasenko, a 44-year-old businessman raised in Moscow, she made multiple trips to Mar-a-Lago in an effort to make contacts and create new streams of business.

Photos from 2021 show the brunette hanging out with Trump, Graham and others, according to the reports.

“It wasn’t just dropping the family name. She talked about vineyards and family estates and growing up in Monaco,” John LeFevre, a former investment banker and author, told OCCRP.

She used “her fake identity as Anna de Rothschild to gain access to and build relationships with U.S. politicians , including but not limited to Donald Trump, Lindsey Graham, and [former Missouri Gov.] Eric Greitens,” Tarasenko said, according to an affidavit obtained by the Post-Gazette.

She said under oath that she has never used another name and has not broken any laws. She told the Post-Gazette that she had never heard of Anna de Rothschild.

“It was the near-perfect ruse and she played the part,” LeFevre told the paper, recalling the woman’s appearances at the club.

Yashchyshyn claims Tarasenko used her for his own gains and was abusive towards her. She claimed any false identifications using the Rothschild name had been fabricated by Tarasenko.

“Over time, Tarasenko became more controlling and aggressive over me,” she said in an affidavit, obtained by the Post-Gazette.

It’s unclear when Yashchyshyn came to the US and began using the name Anna de Rothschild, OCCRP reported.

An ex-husband of Yashchyshyn, Sergey Golubev, told the newspaper the two wed in 2011 so she could obtain US residency and remain in the country.
Golubev, a Russian-born US citizen, was interviewed by the FBI, according to the Post-Gazette.

“At some point, she needed a permanent green card,” said Golubev, 48, who has not spoken to Yashchyshyn since they split in 2016, according to the newspaper.

The Post-Gazette reports they have seen copies of her fake US and Canadian passports in the name of Anna de Rothschild with Yashchyshyn’s photograph, however, has denied she created them.

The alleged infiltration is one of several instances of security issues at Mar-a-Lago in recent years.

In January 2020, a woman was charged with blowing through security checkpoints after leading cops on a high-speed chase, though she was later found not guilty by reason of insanity. Months later, three teens inadvertently trespassed on Trump’s estate while they carried an AK-47 in an attempt to evade authorities, police said at the time.

And in December 2019, a Chinese woman sparked a security scare on the property after she allegedly returned to Mar-a-Lago after she was kicked out. She was later found not guilty of trespassing, but was convicted of resisting an officer without violence. 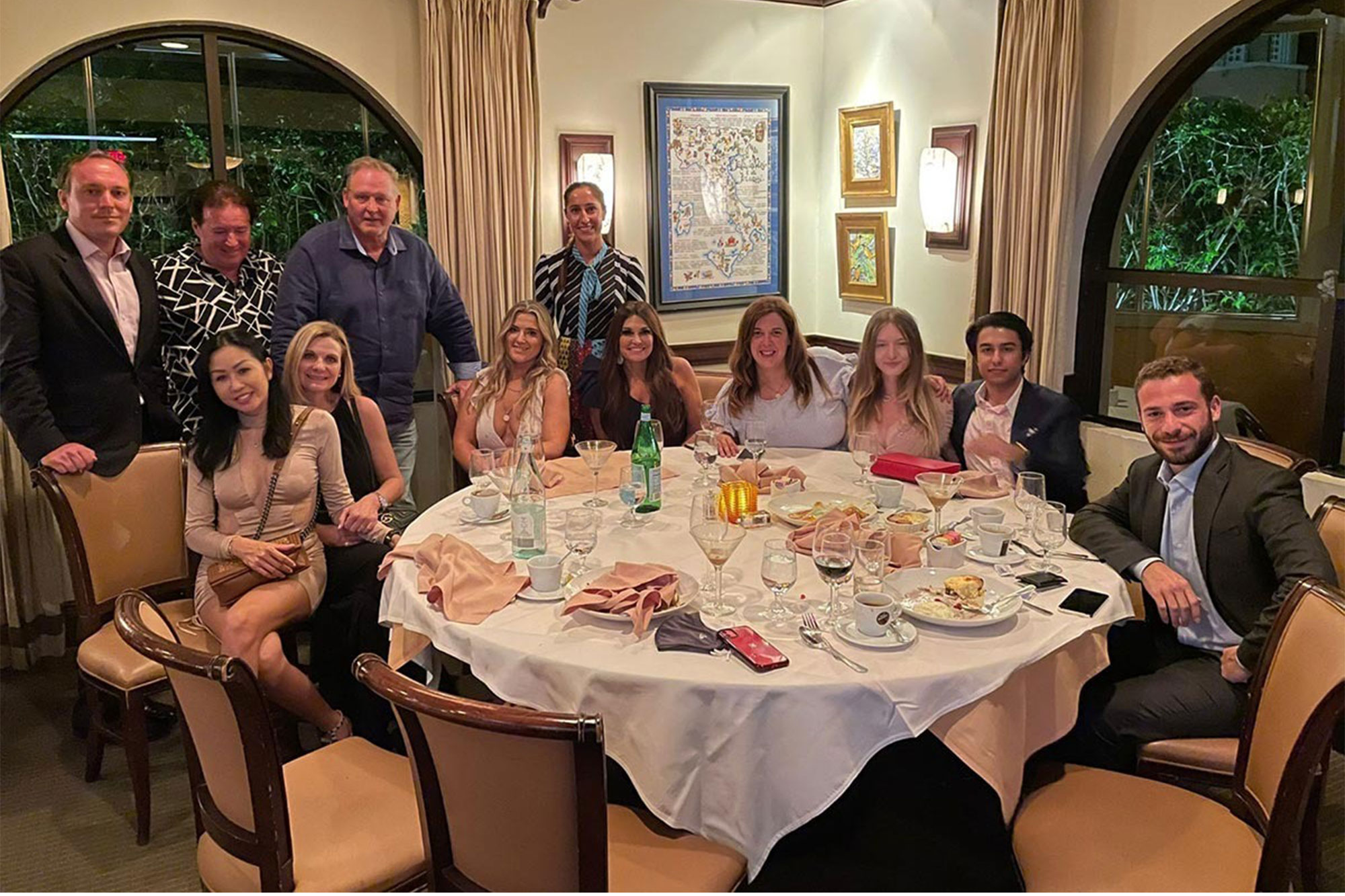 Yashchyshyn and her group dine after a golf fundraiser. She went under the fake name Anna de Rothschild.

https://www.vice.com/en/article/qjkvpm/mar-a-lago-security-breaches
A Brief History of Mar-a-Lago’s Infamously Bad Security
So who the hell else could have been rummaging through all those files before the FBI got there?

Federal investigators maintained a stony silence about exactly what kind of classified documents they were looking for in their dramatic search of former President Trump’s Mar-a-Lago golf club and residence on Monday.

And yet whatever they were, those ultra-sensitive items, seemingly, sat around for over a year at a south Florida golf club notorious for its security problems and interlopers.

Trump’s club was once blasted by a former FBI agent as arguably “the worst counterintelligence nightmare the country has faced since the Cold War.” Politico declared the Palm Beach venue “heaven—for spies.” In 2017, Trump was spotted conducting sensitive foreign policy discussions with the Japanese prime minister at a table on the club’s back patio in full view of other guests eating dinner.

For a membership fee of $200,000, plus $14,000 annual dues, well-heeled members prowled the grounds, guzzled cocktails, mingled with the MAGA elite—and got up to who knows what kind of mischief.

The club’s dubious reputation for security lapses raises another question, beyond merely what the Feds were looking for: Who the hell else got to rummage through Trump’s files, before the FBI showed up?

Even a brief review of the club’s recent past points toward unsettling possibilities.

In one infamous 2019 incident, Yujing Zhang, a 32-year-old Chinese woman, was arrested after evading security. She was carrying five cell phone SIM cards, a hard drive, nine USB thumb drives including one primed with malware, and a device that could detect electronic signals. She had two Chinese passports, and investigators found a device for detecting hidden cameras when they searched her hotel room.

Zhang raised suspicions when she told a receptionist she’d come to attend an event hosted by the “United Nations Chinese American Association”—an organization that does not exist. She was convicted of trespassing and lying to Secret Service agents, and eventually deported to China in late 2021 after serving an eight-month sentence.

The Zhang episode prompted high-level Congressional Democrats to urge the FBI to look into security measures at the club.

A second Chinese national was arrested while trying to get into Mar-a-Lago that same year. Jing Lu, 56, was eventually acquitted of trespassing after telling the jury, speaking in Mandarin through an interpreter, that she didn’t understand a security guard who told her to leave the premises. But she was convicted of resisting a police officer without violence.

Federal authorities opened an investigation into possible Chinese intelligence operations at the club in 2019, the Miami Heraldreported.

Clever spies itching to probe the club’s inner workings needn’t personally enter the venue, of course, so long as they could find one of the club’s hundreds of members willing to pull off an inside job.

A list of the club’s 500 members has leaked in the past. They included metals and mining magnate William Koch, and a billionaire named Thomas Peterffy who spent over $8 million on TV ads warning of creeping socialism in 2012, according to a New York Times report in 2017.

“Trump turned his table into an al fresco situation room,” a reporter for the Washington Post noted at the time.

The club’s digital security has also been found lacking.

Shortly after Trump assumed the presidency, a team of journalists from ProPublica and Gizmodo piloted a 17-foot motorboat up to the back lawn of Mar-a-Lago and aimed “a 2-foot wireless antenna that resembled a potato gun toward the club.”

“Within a minute, we spotted three weakly encrypted Wi-Fi networks. We could have hacked them in less than five minutes, but we refrained,” they concluded.

Then there are the reports that Trump himself has ripped up documents—or even flushed them down the toilet. This week, Axios printed pictures alleging to be official records bearing Trump’s handwriting at the bottom of toilet bowls.

trumps a sucker for a good BJ


who isnt!!!
Reactions: RayGravesGhost
You must log in or register to reply here.

10 year old boy shoots mother for not buying him a VR headset and 6 year old shoots his teacher he was mad at...

The Parking Lot Saturday at 9:04 AM
Dr. Curmudgeon

Conservative trump Supporters Here Have Been Defending A Transgender Insurrectionist