Trump takes the 5th, refuses to answer questions in probe of his business dealings

Is anyone really surprised?


https://www.yahoo.com/news/trump-ta...probe-of-his-business-dealings-154622252.html
Trump takes the 5th, refuses to answer questions in probe of his business dealings
Christopher Wilson
Wed, August 10, 2022 at 11:46 AM


Former President Donald Trump did not answer questions from the New York attorney general’s office about his business dealings during a deposition Wednesday, invoking his Fifth Amendment right against self-incrimination.

The deposition came as part of an ongoing probe into the former president’s businesses launched by New York Attorney General Letitia James. In a statement, Trump said that he "declined to answer the questions under the rights and privileges afforded to every citizen under the United States Constitution” and attacked James for what he called a “despicable attempt” to bring down his company.

James’s office has been conducting a civil investigation into the Trump Organization for “fraudulent or misleading” business practices, including knowingly providing inaccurate valuations of assets to benefit the company. There had been some speculation that Trump might invoke his Fifth Amendment privileges to avoid discussing his net worth, which critics say Trump has exaggerated for years.

An October 2018 report in the New York Times found that Trump had participated in a series of tax schemes related to his father’s real estate empire. In 2019, former Trump lawyer Michael Cohen discussed these business tactics during 2019 testimony with the House Oversight Committee.

Trump had previously said that invoking the Fifth Amendment was a sign of guilt. While campaigning for the presidency in 2016, Trump noted that some staffers for former Secretary of State Hillary Clinton had used the Fifth Amendment to avoid answering questions from a House committee investigating the 2012 attack on the U.S. consulate in Benghazi, Libya.

Trump noted his previous remarks in his statement Wednesday.

“I once asked, ‘If you’re innocent, why are you taking the Fifth Amendment?’” Trump wrote. “Now I know the answer to that question. When your family, your company, and all the people in your orbit have become the targets of an unfounded, politically motivated Witch Hunt supported by lawyers, prosecutors, and the Fake News Media, you have no choice.”

Trump’s deposition comes two days after FBI agents searched his Mar-a-Lago home in Florida. The search, which Trump and his allies have called a raid, stemmed from an investigation into whether he had removed classified documents from the White House. Trump and his allies have said that the FBI’s search of his home was politically motivated, a notion dismissed by former Department of Justice officials.

Trump is also still under scrutiny for his role in the violence of Jan. 6, 2021, which is being investigated by the Justice Department and a House committee.

Additionally, a Georgia district attorney is investigating Trump’s attempts to overturn the 2020 election results in the state, which voted for Joe Biden.
“If there was any question in my mind, the raid of my home, Mar-a-Lago, on Monday by the FBI, just two days prior to this deposition, wiped out any uncertainty,”

Trump said in his statement about invoking the Fifth Amendment. “I have absolutely no choice because the current Administration and many prosecutors in this Country have lost all moral and ethical bounds of decency.”
Last edited: Aug 10, 2022

Keep working it Ray! Just two more weeks! The walls are closing in!

Maybe @FresnoGator can pin a thread just for him, such as:

Read the Constitution, son...it will help with your many problems in this Country!
R

trump lies a lot...creates a lot of material to show how BS he is... 🤣

RayGravesGhost said:
Brandon lies a lot...creates a lot of material to show how BS he is... 🤣
Click to expand...

We agree for once!

I wouldn’t communicate w those vermin either! F them - ALL of ‘em!
Reactions: Capt Ron 1
R

If you’re innocent, why are you taking the Fifth Amendment?
donald trump 2016

RayGravesGhost said:
If you’re innocent, why are you taking the Fifth Amendment?
donald trump 2016
Click to expand...

The Constitution of the United States

Preamble We the People of the United States, in Order to form a more perfect Union, establish Justice, insure domestic Tranquility, provide for the common defence, promote the general Welfare, and secure the Blessings of Liberty to ourselves and our Posterity, do ordain and establish this Constitution for the United States of America. Article. I. - The Legislative Branch Section 1 - The Legislature All legislative Powers herein granted shall be vested in a Congress of the United States, which shall consist of a Senate and House of Representatives. Section 2 - The House The House of Representatives shall be composed of Members chosen every second Year by the People of the several States, and the Electors in each State shall have the Qualifications requisite for Electors of the most numerous Branch of the State Legislature. No Person shall be a Representative who shall not have attained to the Age of twenty five Years, and been seven Years a Citizen of the United States, and who shall not, when elected, be an Inhabitant of that State in which he shall be chosen. (Representatives and direct Taxes shall be apportioned among the several States which may be included within this Union, according to their respective Numbers, which shall be determined by adding to the whole Number of free Persons, including those bound to Service for a Term of Years, and excluding Indians not taxed, three fifths of all other Persons.) (The previous sentence in parentheses was modified by the 14th Amendment, section 2.) The actual Enumeration shall be made within three Years after the first Meeting of the Congress of the United States, and within every subsequent Term of ten Years, in such Manner as they shall by Law direct. The Number of Representatives shall not exceed one for every thirty Thousand, but each State shall have at Least one Representative; and until such enumeration shall be made, the State of New Hampshire shall be entitled to chuse three, Massachusetts eight, Rhode Island and Providence Plantations one, Connecticut five, New York six, New Jersey four, Pennsylvania eight, Delaware one, Maryland six, Virginia ten, North Carolina five, South Carolina five and Georgia three. When vacancies happen in the Representation from any State, the Executive Authority thereof shall issue Writs of Election to fill such Vacancies.


When you get done here...let me know! I will paste the rest for you!
R

How did the deposition go donald? 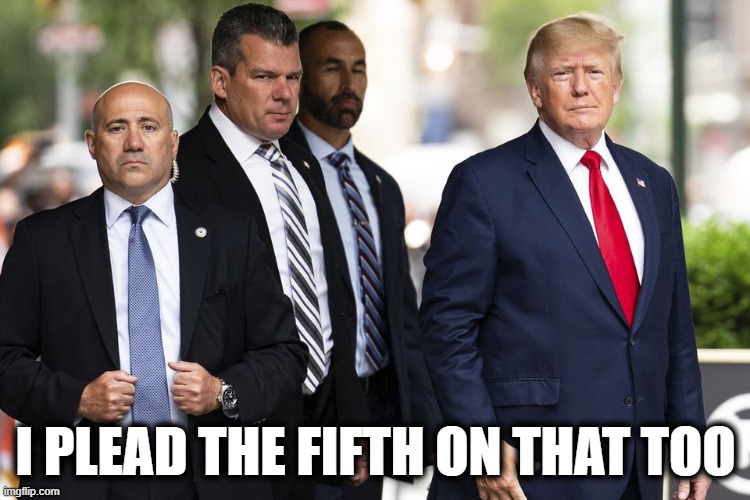 RayGravesGhost said:
If you’re innocent, why are you taking the Fifth Amendment?
donald trump 2016
Click to expand...

His words clearly caught up on him on this one...

He was being retarded when he said people shouldn't take the 5th. And he's doing the smart thing by pleading the 5th. It would be incredibly stupid not to out of stubborn pride.

You don't have to assist the prosecution in their case against you. There's no upside in refusing to plead the 5th.
T

RayGravesGhost said:
trump lies a lot...creates a lot of material to show how BS he is... 🤣
Click to expand...

Just Iike you do. Look at you imitating Trump. You’ve been broken
T

JimGaster said:
I wouldn’t communicate w those vermin either! F them - ALL of ‘em!
Click to expand...

Everyone knows there is no such thing as fair trial for Trump. He should extend the middle finger on both hands and say there’s my answer.
Reactions: Capt Ron 1
You must log in or register to reply here.

Trump Wanted Staff Who Didn't Believe 2020 Election Was Rigged To Be Fired: Report

The trump House of Cards Begins To Crumble...