When a man, identified by law enforcement as a white supremacist, opened fire on Black patrons at a grocery store in upstate New York, Florida Gov. Ron DeSantis, a Republican, balked at calls for stricter controls on firearms, arguing that such restrictions actually contributed to mass casualty events.

Mass shooters are "really, really bad people," DeSantis said at a June news conference, the Florida Phoenix reported. But, he continued, they are "not dumb."

"The Buffalo guy said he wanted to go where he knew there wouldn't be blowback from people being armed, and so he tried to find a gun-free zone," DeSantis said.

But at rallies set to take place this month in Arizona, Ohio, and Pennsylvania, featuring Gov. DeSantis as the star speaker, firearms will be strictly prohibited — and not by liberals.

Attendees should be prepared for "airport-like screening," according to listings for the events posted by Turning Point Action on EventBrite, where would-be guests are encouraged to request tickets. Security will be turning away the visibly intoxicated, according to the listing, as well as also for the following prohibited items: "ammunition, knives, projectiles, pepper spray, expandable batons, [and] firearms."

The listing notes that there is to be "NO CCW," or concealed weapons, "in Event Zone." 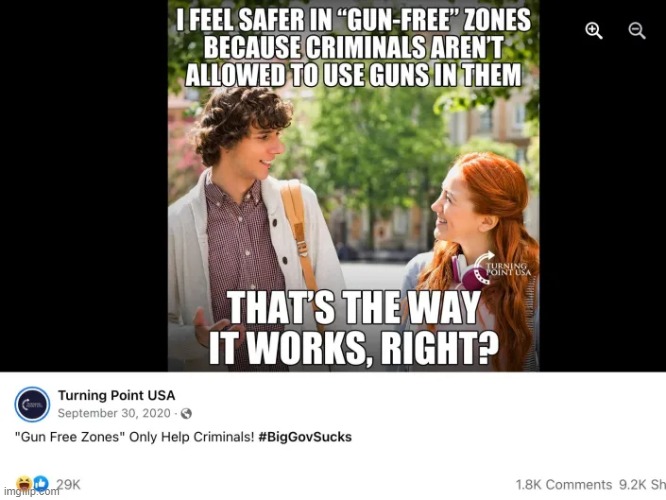 In the recent past, Turning Point USA and its founder have publicly insisted such a policy harms public safety. On its Facebook page, the group mocked the supposed naivete of those who believe "gun-free" zones deter gun violence.

On Twitter, Kirk falsely claimed that limits on the carrying of guns in public places make those places more dangerous. "97.8% of public mass shootings since 1950 have occurred in gun-free zones," he wrote.

Research indicates "gun-free" policies do not actually correspond to greater security risks. A review of mass shootings between 1966 and 2016 found that only 12% occurred "in a truly gun-free zone" — that is, one without armed security — and that only 5% took place in areas where civilians were prohibited from carrying a firearm, per researchers at Johns Hopkins Bloomberg School of Public Health.

Guns have also been prohibited at events attended by former President Donald Trump. In May, the Secret Service insisted that people attending an NRA conference in Houston leave their guns at home if they wished to hear Trump's remarks.
G

This is a head scratcher.

I do question the methodology in the last paragraph. Parkland and Uvalde both had school resource officers, so they weren't "truly gun free" and we saw how well that played out.

If I was in charge of security for the governor I imagine I would prefer not to deal with the headache of concealed carry, but don't be a hypocrite about it.

And it says right in your article that it was the Secret Service, not the NRA who won't let armed people around the former POTUS.
Reactions: RayGravesGhost
R

Not one 2nd amendment patriot has anything to say?

Nothing from the DeSantis faithful?
G

Not one 2nd amendment patriot has anything to say?

What am I, invisible?
Reactions: RayGravesGhost
You must log in or register to reply here.

The Parking Lot May 26, 2022
GhostOfMatchesMalone