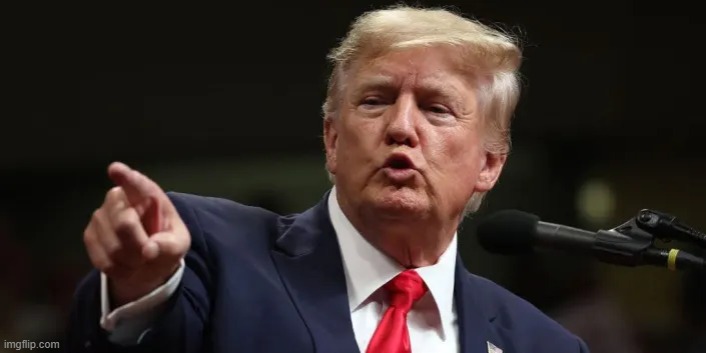 The video, which has gone viral on Twitter, shows the former president speaking at Mankato regional airport, Minnesota, in August 2020 when he was on the presidential campaign trail.

He tells his supporters that Democrats are "fascists," saying they want to "destroy our second amendment, attack the right to life, and replace American freedom with left-wing fascism. Fascists, they are fascists."

Governor Sununu of New Hampshire called on Biden to apologize and said the remarks were "insulting." The RNC, in a statement to CNN, called Biden's speech "despicable."

hahahahaha history has proven Trump correct
Biden and his lib mob ARE a bunch of FACISTS
Reactions: nail1988
R

But Biden used the military as props....Pssst donald trump beat him to it 🤣
Reactions: gatorspeed

Sounds like an accurate description of trump & the trumpanzees...
What's your problem?

trump pressuring Boeing, Kodak, Carrier, and General Motors, interfering in teh ATT/Time Warner deal, negotiating w/ Facebook on its coverage of his admin, subsidizing the agriculture industry & steel industry because of his tariff policies

everything your boy and his lib minions are doing lends itself to fascism - your are either to ignorant to see it or you want it
Reactions: nail1988

BillytheC said:
Like I said on the other thread - you libs and your TDS- none of this is facist no matter how much you ID 10 T’s try to say it is

everything your boy and his lib minions are doing lends itself to fascism - your are either to ignorant to see it or you want it
Click to expand...

Glutton for punishment, they love it as much as Ray loves to stick his fingers in his anus and then smell them.
Reactions: nail1988
You must log in or register to reply here.

Mick Mulvaney thinks Trump is the only Republican who would lose to a Democrat in the 2024 election: 'I hope he doesn't run'

Thanks to Dems, Trump is Still Winning